Using Keyframe Interpolation and Easing in After Effects

Using Keyframe Interpolation and Easing in After Effects

A motion designer, let’s call him James, spends a long time in Adobe After Effects creating an animation. He designates all the keyframes with great care and makes sure everything is in place. Now it’s time to render everything and take a look at the end product. But wait, James thought, something doesn’t seem right. All the A to B movements are on point, but it doesn’t feel right, it doesn’t look “Real”. What went wrong? What could be the missing puzzle piece? Well, If James was a more experienced motion designer and knew a thing or two about Keyframe Interpolation and Easy Ease, he would have never faced this issue. But what is Keyframe Interpolation, you may ask, and what does this Easy Ease do that makes the animation look more believable? Well, no worries my fellow motion designers because I’m here to explain the same thing.

This sample does not use Keyframe interpolation

Keyframe Interpolation — yea I agree that the name can be a bit of a mouthful — is when you create two keyframes for your object in After Effects to designate the path it should follow and then After Effects generates a default speed for it based on the time and distance you have chosen. But how close is the estimation of After Effects to a real-life situation? To explain a real-life example, we need to turn our attention toward the good old law of conservation of energy. Yes, that may sound a bit technical but here is a TL;DR version: every object will keep its constant movement speed as long as nothing interferes with it. And the key here is Interference, the thing that James took for granted in his animation. In real life, all things are interfering with one another. For example, when you throw a ball upward, it would keep on going forever unless something interferes with it, in this case, the gravity. It is the gravity that makes the ball lose speed little by little until it reaches a momentary full stop, then it will change course and move toward the ground while gaining speed, again by the interference of gravity.

But what does it mean for Animation?

It is simple, if you want to make your animation look more realistic you need to apply the same “Interference Effects” to your animation. Normally when you create an object in After Effects and try to move it using keyframes, it would just go from A to B, in a constant speed with no regard for any possible “interference”. That’s why when you look at the end result you would feel that the movement doesn’t seem right. It is here that Keyframe Interpolation, especially Easy Ease, would come in handy. By using Keyframe Interpolation you can easily control how your object behaves in relation to its environment. For example, when in After Effects you apply Easy Ease (applicable by F9) to your keyframe, you would notice the variation of speed between keyframe A and keyframe B, based on the keyframe you have applied it on. After Effects also gives you the option of changing the settings, so that you can reach the exact form of movement you have on your mind.

This sample does use keyframe interpolation

Linear Interpolation, is the most basic interpolation. You will just designate the path and After Effects will take care of the rest. But this form is very un-natural and most people try to avoid it

Bezier Interpolation, is a completely manual control of the interpolation and is often used by professional

Auto Bezier Interpolation, is a useful method that will let After Effects decide on the speed of the moving object, making the movement look more natural

Hold Interpolation, is generally used for when you want to freeze a certain layer

Give me that After Effects Easing!

Now that we know what Keyframe Interpolation is and what it does, only one thing is left to discuss, how can a motion designer control and manipulate it based on their preference? Well, my fellow motion designer, the most common method for customizing Keyframe Interpolation is to use the Graph Editor (you can find it in the timeline of After Effects). At first, the Graph may look a bit scary to work with, all graphs do, but when you start to work with it and do some trial and error, you’ll get the hang of it. The graph is showing you the speed of the object measured in Pixels per Second and by changing the position of handles, visible in yellow, you can change the speed behavior of your object through time. After Effects also gives you the option to see the changes in the form of frame dots appearing on the line showing the movement path of the object, as you fiddle with the graph. I believe keeping an eye on these two elements at the same time is a good way to guesstimate the outcome of your animation. Also to better understand how different shapes of graph work and even predict what will the animation look like, you can check out this link, where you will find a gathering of different movement situations in After Effects and their corresponding graph shapes. 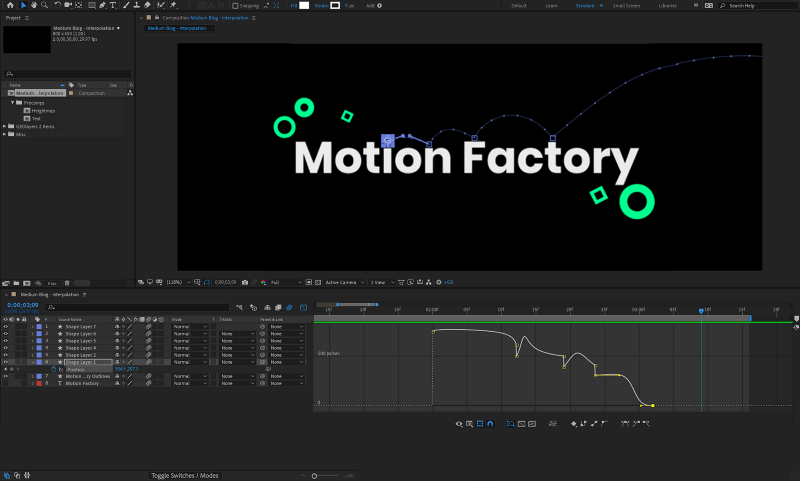 You see? It wasn’t that hard or complicated. Remember, investing some time in learning Keyframe Interpolation, especially Easy Ease, and somewhat mastering it will go a long way because the way your object moves in relation to its environment is really important. The more natural and realistic your animation looks, the better would be the effect it will have on the audience.